To know honor and loyalty is to know Hiro Ueda. The epitome of selflessness, he has made a living in putting the needs of others first.

Most of all, Ueda’s story is one of blending two cultures, his native Japan and the United States, which he did without compromising his passion for either. He fell in love with the U.S. following a backpacking expedition in the mid-1980s and set a since-fulfilled goal of becoming a successful American businessman. His ride name in The Patriots Pack is DOMO, which exemplifies his crossover sensibilities: domo means “thank you” in Japanese, and in English, it’s short for “do more.”

More than 30 years later, it is impossible to wipe the smile from his face, as it’s been forged by years of gratitude. “Work is kind of a hobby for me,” says Ueda, a 2022 ENX Magazine Difference Maker. “To me, it is work and life integration instead of work-life balance.”

For the past 36 years, Ueda’s journey has carried him through stints with Japanese and U.S. operations with focuses on office imaging, IT and software organizations. In fact, his first job upon graduating—a position with a commercial trading concern—was exporting 9 ppm Casio printer engines to OEMs in Europe (the units cost $4,000 and were extremely heavy). He joined business partner Mike Stramaglio at MWA Intelligence in 2007 (later acquired by Konica Minolta) and, for the past two years, the dynamic duo has focused their efforts on Stramaglio Consulting.

Stramaglio has had a profound impact on Ueda’s career and the men have exchanged philosophies and best practices that have benefitted them both. Ueda believes connecting people, business and things to create good friendships, partnerships and solutions have proven to be extremely satisfying. In Stramaglio, he has found a lifelong friend. In fact, Ueda passed up on a job opportunity that would’ve returned him to Japan, opting instead to accept an offer from Stramaglio.

“On my first business trip with him about 22 years ago, while we were waiting for a cab in San Francisco, he taught me to ‘pay it forward,’” Ueda recalled. “I still remember the scene clearly and it was the start of my career learning from him. These three Is—imagination, initiative and integrity—are always on my mind.”

Coming off the pandemic’s first year, Ueda and Stramaglio teamed to develop The Consortium, a collaboration of the industry’s biggest and brightest thinkers with the aim of creating open engagement and facilitating digital transformation within the imaging channel. The Consortium, which numbers about 60 members, also helped to fuel a successful Executive Connection Summit last January.

“It is my hope we can make ECS 2023 the best event ever for the industry,” he said. “The goal is to continue to help people and businesses get connected for their mutual success.”

On the personal front, Ueda and his wife, Yoko, have been married for 33 years. They have two sons and a daughter, all born in Japan but mostly raised in the U.S. Their oldest son, Yudai, is studying for a Ph.D. in music conducting. Son Jumpei and daughter Akari both work in Japan for American businesses. He has a granddaughter, Nono, who will turn two on Christmas day. Ueda loves to golf and has set a goal to break 80 on the links. He’s also a huge baseball fan and ardent supporter of Shohei Ohtani. 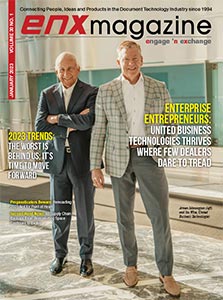