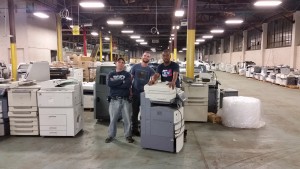 With companies in the document imaging and office technology industries vying for the spotlight as industry players, the fight to stay ahead of the competition and capture significant market share has never been fiercer. Businesses are investing countless dollars to beat out their competitors who are all headed in the same direction by capitalizing on technologies including cloud capability, mobility, and seamless IT integration systems as integral components of their product lines.

Town Business Center has used this industry landscape to head in a completely different direction, which resulted in carving a niche business. Instead of running the retail rat race, its strategy focuses on the products most companies consider to be last year’s or even last decade’s news. TBC buys and sells used photocopiers that small to medium sized businesses are discarding for the newer, shinier, cloud-enabled, high functioning office machines.

Instead of these companies wasting their used machines and simply tossing them to a recycling company, TBC provides an equally environmentally friendly option. Not only that, TBC pays a higher premium for the used equipment than a recycling company will. 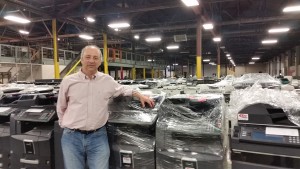 “We are a green company because we provide profitable marketing solutions for used equipment,” explains Steve Libenson, the company’s founder, as one reason customers find it attractive to sell their copiers to Town Business Center.

“Who is going to want these pieces of junk?” you may ask, quite relevantly, considering we are bombarded with advertisements showcasing the most recent technologically enhanced office equipment.

“Not all businesses have the budget or the desire to have the latest model on the market,” says Libenson. “They just need a copier that can get the job done with reliable print, scan, and fax capabilities that work quickly and produce high quality copies.”

Libenson saw a need in this relatively untapped market when he got into the business over 20 years ago, initially focusing on the domestic market. During the pre-Internet days, Libenson built a business around companies who wanted new machines, but didn’t have the budget for a retail priced copier.

Today, TBC primarily sources their inventory from end users and dealers, which are then transported to its newly acquired 94,000 square foot warehouse in Wilkes-Barre, PA. Here the copiers are refurbished by onsite technicians, who have more than 20 years of experience in the business.

All machines are thoroughly tested for functionality because no one wants a copier that jams or prints gibberish as is commonly depicted in office-themed comics. In order to protect the privacy of the previous owners, each hard drive is completely erased.

Town Business Center has come a long way since it opened its “shoe box sized operation in February of 1993,” as Libenson refers to his very first location. To put the growth his business has generated into perspective, his current location (which he switched five times over the course of time to accommodate the influx of inventory), is 90 times the size of that original shoe box sized office.

“I had six copiers as a starting inventory, $200 in cash, a $4,000 line of credit, and a beat-up Chrysler minivan,” he recalls. Libenson says this matter-of-factly, seemingly unaware of the odds he overcame.

Entrepreneurship is inarguably risky; a business surviving past its first year is equivalent to flipping a coin and choosing heads or tails. His coin landed right side up. In eleven months, TBC’s 1993 end of year revenues were over $100,000, a solid number for a brand new business in those days. 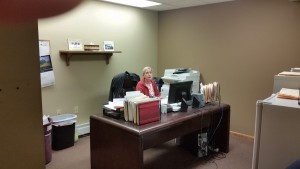 With the growth of the little invention called the Internet, an entire new world of opportunity presented itself. Located in Northeastern PA, TBC is located only two hours from two port cities, New York City and Philadelphia. With this geographic advantage, the business was able to dive into exporting. For the past 15 years it has been cultivating relationships in countries with developing economies, primarily in South America and Asia.

The export-focused wholesale business model was the driving factor for the company’s ability to not only survive, but actually thrive throughout the 2008 economic crash. While most businesses were hurt or forced to close up shop during this time period, TBC gracefully weathered that storm and seized opportunity in foreign markets with a devalued dollar.

“As the dollar went down, down, down, business went up, up, up,” recalls Libenson of this period. On the contrary, most American business owners shudder at any mention of 2008, as most likely their income statements were in the red.

“I get phone calls from companies in China, Vietnam, India, Singapore, even Pakistan. And they all want one thing: more copiers,” states Libenson.

When asked which country he enjoyed doing business with the most, Libenson answers without hesitation, “China. They have two things every business owner loves in a buyer, constant demand and lots of cash.”

Whereas the majority of businesses struggle in finding ways to grow their sales, Town Business Center has the opposite problem. “We need more stuff,” Libenson consistently tells his associates.

As the ecommerce industry began to boom, TBC was able to piggyback on the success of companies such as eBay and its Chinese equivalent, Alibaba. Foreign buyers are endlessly filling up the team’s e-mail and voicemail inboxes requesting more machines. And the orders are not for half a dozen machines—oftentimes orders are for upwards of 100 or 200 units.

“Do these guys ever sleep?” asks Libenson, jokingly referring to his clients in East Asia. “They call the office here at noon, but it’s 2 a.m. their time.” 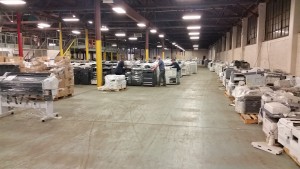 To say the company is a melting pot is an understatement. It’s not uncommon to walk into the warehouse and see visiting customers who have traveled 7,000 miles from Buenos Aires or Hong Kong to Wilkes-Barre to look at the 100+ units they are purchasing. Amongst each other, they may be speaking in Chinese, but that is not the extent of the foreign languages spoken on the company’s premises.

Two of Libenson’s employees, a sales representative and an office assistant, are Israelis who communicate with each other in Hebrew. The head technician is from India and often speaks Punjabi with fellow native visiting customers. Libenson’s college language classes have paid off as well—you can often hear him on the phone conducting business in Spanish with his Central and South American customers.

Having a multi-lingual staff certainly has its advantages. “It provides us the opportunity to communicate and work with interesting people from all over the world,” comments Libenson enthusiastically.

For the past year, TBC has been facing a challenge most businesses would dream to include on a list of problems—a lack of space due to increased purchases and sales. Of course with every obstacle, there is a solution. In the beginning of the year, Libenson was presented an opportunity to switch locations to a building triple the size of the warehouse he owns in Exeter, PA. As of April 1, TBC has been in its new location with over 94,000 sq. ft. of warehousing and office space. The expansive building has an impressive five loading docks, 12 offices, a conference room, and even a bathroom with luxury shower.

Internally, employees enjoy the rare privilege of working autonomously. TBC has salespeople based in St. Louis and New Jersey in addition to its main office. Libenson’s decision to bring on remote sales representatives has been another factor in TBC’s explosive growth, which would have been impossible to achieve if the company had a culture based on micromanagement.

Overpromising and under-delivering may be common in business transactions; however, TBC consciously strives to not interact in such a capacity with its clients.

“We do not compromise on paying top dollar for inventory and pick up the equipment promptly,” expresses Libenson confidently.

Beyond a comprehensive list of makes and models, TBC purchases from end users and dealers and what customers appreciate is that they pay in full and in a timely manner.

“Since we are a small business, there is no red tape like there is with large corporations. We take care of everything fast,” adds Libenson.

TBC shows no signs of slowing down. “We are looking to grow aggressively at a rate of approximately 20 percent a year,” predicts Libenson. “With a building that is triple the size of our previous location, we are definitely open to exploring new opportunities and creating partnerships with other companies in the industry. We are always looking to develop new relationships with suppliers to accommodate the demand for our exporting portion of the business.”

TBC welcomes business inquiries from companies all over the United States and Canada.

As the financial journalist B.C. Forbes stated, “If you don’t drive your business, you will be driven out of business.”

With the past two decades as a benchmark for future performance, Town Business Center isn’t giving up the car keys anytime soon.