KYOCERA Aims to Build a Winner for Dealers: A Conversation with Danielle Wolowitz 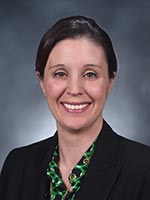 During the KYOCERA Innovate dealer meeting, held April 9-11 in not-so-sunny Orlando, FL (it rained much of the time), ENX Magazine was fortunate to carve out of a few minutes of valuable time from the schedule of Danielle Wolowitz, vice president of corporate marketing. Wolowitz brought her own brand of sunshine to discussing a number of topics, from the program host to the event rebranding, along with its historic foray into high-speed production inkjet.

Hannah Storm was a fantastic emcee. How did you manage to select her as a host?

Wolowitz: Our production company pitched her to us. They had worked with us for several years and knew the dynamics of what we were trying to achieve this year, so they recommended Hannah as a host. We know Ed (Bialecki) and Terry (Knopsynder’s) love of sports and the production company felt strongly about Hannah. The schedules permitted and we were able to make it happen.

What was the idea behind the It Takes a Team theme?

Wolowitz: Typically, we’ve held the theme back and not disclosed it until the general session. Going with KYOCERA Innovate as our new brand will carry on for several years. But we wanted a sub-theme. That was the underlying message we wanted to convey. For us, everything we looked at—the infrastructure we’ve been building out, the new players with DataBank, everything we’re doing with Hyland, the new inkjet product—all of it is going to require some level of a team, and teamwork is critical. It Takes a Team was extremely logical. We had that done before we started to move forward with Hannah. It helped to bring that sports element in.

Very seldom does a dealer meeting have such a tremendous focus…

Wolowitz: Between Mr. Ina, our global president, to Mr. Ikeda, our president and CEO in the U.S., they’ve both been very clear about their objectives and goal for the company. Mr. Ikeda refers to them as the three pillars: core business expansion, introducing TASKalfa Pro and Total Document Solutions (TDS) 2.0, Beyond the Document. When you look at the aspects of our business where we feel the growth opportunities are, they all fall into those three categories. Are there future diversifications that we can make? Yes. But for today and the near future, those are the three areas of focus.

The core business expansion is a logical one. We are a hardware manufacturer by trade, we have a wonderful portfolio of developed applications that we’ve done on our own, and the services aspect has always been strong for us. That will continue to be a focus and we need to build on the foundation that we have. The introduction of the TASKalfa Pro is obviously a net-new market entry for us, one that we’re extremely excited about, and we’re confident it’s going to be wonderful for us and our dealers.

The third pillar is the introduction of DataBank into the fold. When we made the acquisition last August, we were already planning on how we were going to marry the two together in a more cohesive way. We wanted to be able to bring this to market to our dealers in a uniquely, distinct way, different from what our competitors have done. We’ve seen a lot of companies do it over the years, with varying degrees of success. KYOCERA is dealer-centric. We wanted to make sure that whatever program we brought to market was going to be as dealer-centric as everything else we’ve ever done. We think we’ve done that with TDS 2.0. For us, it actually makes the agenda and the meeting easier to have that tailored focus, because now there’s a clear path. There was a clear track that we wanted people to follow, and there was clear understanding. We didn’t want to throw too much out there and confuse the audience as to where they should really focus. I think we’ve made a clear statement this year of where we see the growth opportunities and what we’re going to do to help dealers get there.

Both DataBank and Hyland speak to the heart of the teamwork initiative.

Wolowitz: From day one of the relationship with DataBank, it’s been that synergy. Our two companies really do align with their thinking. And once we started engaging at a different level with Hyland, that relationship has been great. The force they brought with them this week to help us through the show, the daily communication that we have with them, the training and support, has been phenomenal. Hyland has definitely been a great ally to us.

So why inkjet and why now?

Wolowitz: This is only a preview of the product and not an official launch. For us, it was a logical extension of the product line. Our technology affords us the ability to get into inkjet in a fairly easy manner. This is a KYOCERA Document Solutions product and we’ve developed it from the ground up. We’ve been working on it for a while; something of that magnitude doesn’t happen overnight. They’ve taken very careful consideration into the market. Knowing that our product line has lacked anything above the 80-page-per-minute range, we had to make some careful decisions regarding what area we went into, because R&D in that segment can be quite expensive and the return on investment is slow. So when they looked and evaluated the market and worked with the sales companies—with the parent company doing the initial research, and then working with us in the U.S. and Europe—when we considered where the demand is, we felt it made perfect sense. I think the response we’ve had so far from the dealers is just proof that our research was spot-on. There is absolutely a need for this type of product in the market, and we’re going to be highly successful with it.

How are dealers going to be able to build the competency to sell and service an inkjet machine?

Wolowitz: We’ll need to be there with them for every step and help them along the way, guiding them, teaching them, helping them to do it on their own. We’re going to establish a TASKalfa Pro certification program. The criteria have not been determined, but it will come with agreements that the dealers will have to have certain capabilities in-house in order to qualify. I think that’s only fair. We do it on the ECM side; you have to have some base-level requirements to get into TDS 2.0. There will be an extensive training program for the product, both sales and technical. The classes will be offered through us, and any dealers that are interested can sign up for it and we’ll work through the process with them.

Is every dealer going to be able to do it? No, but not every dealer sells production today, either. It has to be right for their dealership. There’s an underlying message we need to make sure everyone understands. There are two factors that go into wanting to move into a different market, whether it’s ECM or inkjet or production print. You have to have both the desire and the capability within the organization, and that has to come from the top. The capability is something that you can build. If it’s not there already, either we can help you or there are outside sources that can help you. There are ways to build out that infrastructure and the capability. But what we can’t give people is the desire. They have to want it. They need to know that this is the direction that they want to go. With a product like this, it’s definitely an investment. So they’re going to have to be on board in order to move forward with it.

Any other takeaways you hope dealers bring home from the dealer meeting?

Wolowitz: I hope that they realize that in a market that’s changing, in a world of manufacturers that’s changing and evolving, that KYOCERA—as we evolve—is going to bring the dealers along on that evolution. We’ll step through this with them, and in some cases, it will be a learning experience for both of us. As we were navigating this whole idea of Hyland and TDS 2.0 with DataBank, we did turn to dealers who were already resellers. We asked, what has made you successful? Why did you make certain choices? Do you think it’s the right choice for KYOCERA? We value the opinion of our dealers as much as we hope they value our opinion. If anything, I would want them to take away that we’re not just moving in a direction blindly. We’re going to do it for a purpose, we’re going to do it with them and we’re going to be successful together. 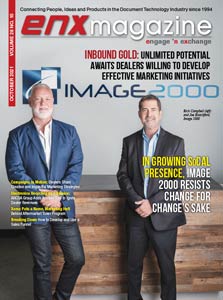